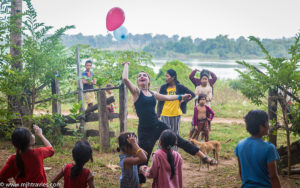 Our guided expedition to Cambodia went as well as anything we could have hoped for. We paddled the Mekong, visited floating villages, explored ruins, and learned about Khmer history. And of course, we had an amazing group which made it all the more enjoyable.

As always, our village stay on the banks of the Mekong was a highlight of the trip. We brought balloons which were a huge hit with the children who followed us around like a mob. In the evening we had a multi-family dinner followed by music and dancing. Sadly, we had to say our goodbyes the next morning, waving at the over 100 villagers lining the river bank. After a few hours of paddling we were having lunch on an island surrounded by the endangered Irrawaddy Dolphins.

After completing the Mekong leg of our trip, we went west to Siem Reap. From here we visited the amazing ruins of Angkor Wat before heading into the stilt and floating villages of the Tonle Sap Lake. We spent one night sleeping in a floating house which was nice enough, but we might have slept better without the sounds of hissing and thrashing crocodiles only feet away from us in their cage.

As a perfect finish of our trip, we spent New Year’s Eve in Siem Reap where the streets were full of people celebrating the New Year.

We already can’t wait to do this trip again next year.

A Bamboo Raft and a Funeral in NE Cambodia
Elephants, Gibbons, and Waterfalls