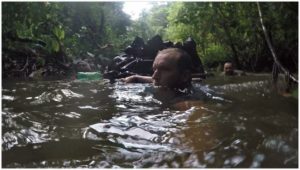 FHE teamed up with Puro Amazonas to lead our Survival Seminar through the Colombian and Brazilian Amazon.  We covered many topics of survival in the jungle to include Wilderness First Aid, safety, food, use of a machete, raft building, and more.  Upon completion, all participants received certification in Wilderness First Aid from SOLO.

One of the highlights from this trip came after pushing into the jungle on foot for nearly two days.  When we came to a creek, we decided to build a raft just big enough for our packs.  We then swam the raft down the creek for a couple hours which was a welcome break from the walk.  Navigating the current and obstacles in the water was a challenge at times.  We had to pull on overhanging vines, kick off the bank, push the raft over and under downed trees, and occasionally cut vines and branches out of the way with a machete while swimming.

We eventually abandoned the raft after getting it stuck on a log with several wasps of a particularly mean look and painful sting.  Obviously they needed it more than we did, so once again we set off on foot.

That evening as we got closer to civilization, we found an abandoned settlement with several fruit trees so we decided to set up camp.  Much of the fruit wasn’t quite ripe but that didn’t stop us from eating our fill, resulting in the loss of taste buds to the acidity and an upset stomach.  Worth it.

Elephants, Gibbons, and Waterfalls
A Visit to The Explorers Club HQ